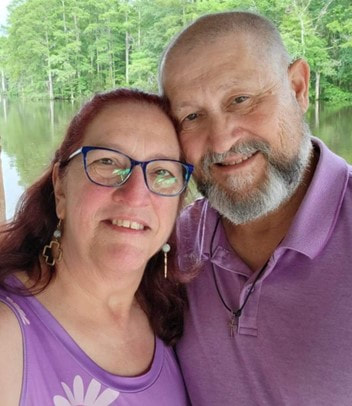 ​Pastor Merritt Taylor, and his wife Pam, are originally from Williamston, in Eastern NC. They were married in 1980, and they have three daughters and eight grandchildren. After coming to know Jesus as Savior at 13, it was not until Merritt was in his 40’s that he surrendered to God’s call to become a pastor. He and Pam left everything behind in June of 2004, moved to Hendersonville, and where Merritt enrolled in Fruitland Baptist Bible Institute (now college) to begin his pastoral education. He and Pam both worked on campus during their time at FBBC. He graduated in June of 2006 and enrolled at Liberty University in August of that year. He graduated with BS in Religion (magna cum laude), and after taking some time off from school, he enrolled in the Liberty Baptist Theological Seminary, earning a MS in Evangelism and Church Planting in May of 2012. During their time at time at FBBC, Merritt and Pam were actively involved in the ministries of Bat Cave Baptist Church, and in December of 2006, they moved to Sanford, NC, where he began serving as pastor of Cumnock Baptist Church. He remained there until March of 2012. They answered God’s call to begin serving at Shoal Creek in September 2013.

​Merritt has a simple ministry philosophy, based upon the greatest commandment and the new commandment as given by Jesus. Love God above all others; love your neighbor as yourself; love others like Jesus loves us. His goal, through building lasting relationships, is to lead others to become disciples who do these things for life. When these things are done with completeness and purity of heart, everything else will come together for God’s glory.
During Merritt and Pam’s life together, he became a master craftsman in the industrial maintenance field. He has also worked as a carpenter, in the logging industry, and in quality control. He loves most things outdoors, hunting, fishing, sports, and riding motorcycles. Pam is a homemaker, dedicated wife, Mother, and G Momma, and she loves to do all kinds of crafty and artsy things. Merritt and Pam have both served in many capacities in the church during their walk with Christ. Their roles have included leading GA’s, Acteens, volunteer youth leaders, Sunday School teacher and director, support group ministries, to coordinating and planning mission trips, and Merritt has served as a deacon and chairman of deacons. They believe in actively being the hands and feet of Jesus, from taking in troubled kids, a homeless family of five, as God directed, to doing the small things that show others the love of Jesus. This is all to bring people to know Jesus as Savior and to lead them to become disciples.
Merritt’s vision is to see Shoal Creek be actively involved in making disciples by meeting people at the point of their need, and as you meet that need, you lead them to walk with Jesus.
Websites by Keith